For four decades, Clover Moore has fought alongside LGBTIQ communities for equality and an end to discrimination. 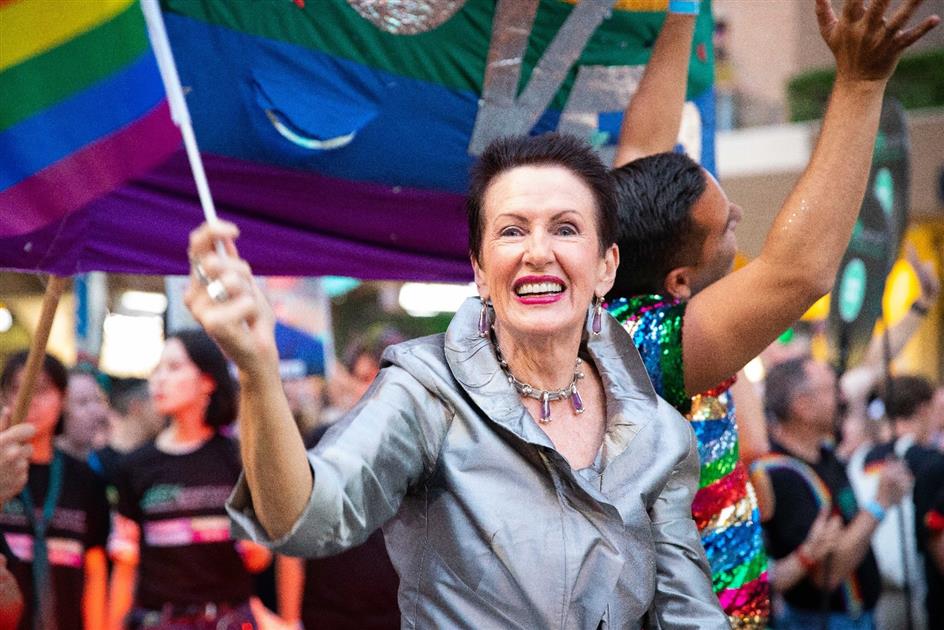 As a State MP

For four decades, Clover Moore has fought alongside LGBTIQ communities for equality and an end to discrimination, as State MP with her 1993 Homosexual Anti-Vilification Bill and 2010 Adoption Amendment (Same Sex Couples) Bill, which enabled same sex couples to adopt as a couple.

Her Significant Personal Relationships Bill became a model for Tasmanian and Victorian legislation, as well as the City of Sydney’s relationship declaration program which ran prior to the launch of the NSW Government’s relationship register in 2010.

Clover Moore was the first Member of the Legislative Assembly to march in the Mardi Gras Parade in 1992 and is proud to march in the parade alongside Member for Sydney Alex Greenwich MP and her volunteers each year.

Throughout the year, we celebrate Sydney’s LGBTIQ precincts by flying rainbow banners along Oxford Street, Taylor Square and in the city centre. And during the Mardi Gras festival, we proudly raise a rainbow flag at Sydney Town Hall - sending a strong message to Sydneysiders and visitors that our city is open to everyone.

Under Clover Moore’s leadership, the City of Sydney has adopted its ‘City for All’ Social Sustainability Policy and Action Plan - striving for an inclusive, connected, liveable and engaged city. We appointed an LGBTIQ Community Programs Officer and maintain a dedicated collection across our library network, with significant LGBTIQ collections at Newtown and Surry Hills. We also support community organisations to put on their own events and support their communities, with cash grants and value-in-kind sponsorship to organisations such as Rainbow Families.

In 2017, we supported the marriage equality campaign, by providing office and shop front space to Equality Australia and flying hundreds of rainbow banners throughout the city. We sent a mailout to the entire community to encourage a ‘yes’ vote and hosted a massive postal survey results picnic for 20,000 people in Prince Alfred Park, with the lawn now known as ‘Equality Green’ to celebrate the historic win that day. After marriage equality became law, we waived venue hire in City of Sydney halls and parks for a period of 100 days, as a small gesture of goodwill in the spirit of celebration.

In 2019, we unveiled our new, rainbow-shaped and permanent rainbow crossing on the corner of Bourke and Campbell Streets near Taylor Square. and is in the shape of a rainbow! this was a huge win after our first rainbow crossing painted in 2013 was ripped up by then Roads Minister Duncan Gay in the dead of night.

Sydney is now looking forward to hosting the marquee international pride event, WorldPride in 2023. We helped Sydney Gay and Lesbian Mardi Gras with $100,000 toward their successful bid and to help with pre-event costs, with in-principal support for a further $150,000 cash sponsorship. WorldPride will be a major event, not just for Sydney or Australia, but the whole Asia-Pacific. Despite significant strides, LGBTIQ people in Australia and across the region are still fighting for equal rights, including recent moves to mandate discrimination and restrict hard-fought rights.

The Commonwealth Government’s proposed Religious Discrimination Bill risks grave impacts on City of Sydney residents and may undermine the City of Sydney’s capacity to operate as an inclusive and cohesive organisation.

The Bill in its current form would allow people to rely on their religious beliefs to make statements that humiliate or intimidate others in the workplace, in school, on public transport or in any setting. For example, a person could rely upon the Bill to make anti-Semitic taunts on a bus or a boss could to say to their employee ‘I don’t agree with your lifestyle because the Bible says homosexuality is a sin’.

This would make it difficult for the City to manage employee conduct inconsistent with its values of Courage, Collaboration, Integrity and Respect. It could also create conflicts with the City’s Code of Conduct, which prohibits harassment and discrimination.

That’s why Team Clover endorses Equality Australia’s Freedom from Discrimination Statement calling for the Bill to be changed.